The 2014 University Interscholastic League Football State Championship games will be played at AT&T Stadium in Arlington.

“Having all football championship games in one location truly makes for an amazing experience for the coaches, athletes and fans, and last year it lead to a Texas high school football attendance record,” said UIL Executive Director Dr. Charles Breithaupt. “We are excited to return to AT&T Stadium and continue to improve on a world class event in the state of Texas.”

The 2015 University Interscholastic League Girls and Boys Basketball State Tournaments will be played at the San Antonio Alamodome, the League announced in July.

During the summer the UIL joined more than 28 million people that have participated in the ALS Ice Bucket Challenge. The cultural phenomenon, which involves donating $100 to charity or dumping a bucket of ice water on your head and donating only $10, has helped raise more than $100 million for the ALS Association.

UIL staff was challenged by several individuals and organizations and answered the call by donating to ALS research in addition to making their own ice bucket challenge video. Several UIL staff members participated in the video, which can be seen on the UIL YouTube page (www.youtube.com/uiltexas).

Dr. Charles Breithaupt was inducted into the Texas High School Football Hall of Fame this month.

Dr. Breithaupt will be inducted in a class of eight individuals, one coach and one inductee from each decade from 1950-2000. Dr. Breithaupt is being inducted in the category of Dave Campbell Contributor to the Game. The Dave Campbell contributor to the Game is a special category of inductees that has included team doctors, school administrators, media members, among others.

Members are selected by a statewide committee made up of sportswriters, high school football coaches and members of the Texas high School Football Hall of Fame Board of Trustees.

The University Interscholastic League is proud to recognize 17 of the best UIL sponsors in Texas as the 2013 UIL Sponsor Excellence Award winners.

A panel of judges in the areas of academics, athletics and music selected the winners from nominations submitted by school principals and superintendents across the state.
The award, now in its 23rd year, was created to identify and recognize outstanding sponsors who enable students to develop and refine their extracurricular talents to the highest degree possible within the educational system.

“The merits of interscholastic competition and student performance can only be achieved through the hard work and dedication of sponsors, coaches and directors like these,” said UIL Executive Director Dr. Charles Breithaupt. “On behalf of the UIL, I commend these outstanding educators.”

UIL music history was made this year at the State Marching Band Contest when the Leander Independent School District became the first Texas school district to take the top three spots in the 4A division.

“This accomplishment would not have been possible until about 12 years ago because UIL marching band advancement procedures did not allow for more than two bands from any Area Marching Contest to advance to State ” Dr. Bradley Kent, UIL music director, said. 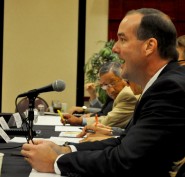 Dr. Dan Troxell presents the Academic Committee proposals to the full Legislative Council at the annual meeting in October.
Photo by Jeanne Acton

The UIL has been a part of Dr. Troxell’s life since high school. As a student-athlete at Round Rock High School, he competed in football and basketball.

“The most important thing I learned is the importance of team work and teammates,” Troxell said.

UIL Online Store Up and Running

Shopping at UIL just got a whole lot easier. No more faxes or filling out paper forms to get what you need.

“Our goal was to create a store that was in line with what a customer would expect of online shopping,” Technology Director Kelly McCollum said. 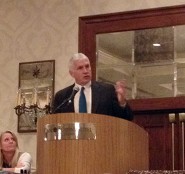 University Interscholastic League Executive Director Dr. Charles Breithaupt was selected as a recipient of the Texas Girls Coaches Association Citation of Merit Award given to him at the association’s annual summer convention.

Breithaupt, a coach and educator for 17 years before joining the UIL, is only the second recipient of the TGCA’s highest honor. The award is given to individuals who have gone above and beyond in contributing to the success of the TGCA and is only awarded on odd years when the association’s convention is held in Austin.

“There is no more deserving person than Dr. Charles Breithaupt,” TGCA Executive Director Sam Tipton said. “It’s been a great, great partnership, and we just wanted to give back a little to him for what he has done for girls athletics and the Texas Girls Coaches Association.”

Each of the first five editions of UIL NOW for the 2013-14 school year will feature one of last year's UIL Lone Star Cup winners, like Salado High School.
Photo by Jana Riggins, Speech and Debate Director

The University Interscholastic League’s video series, UIL NOW, has undergone some changes over the summer. In its previous format, the video focused on upcoming events and deadlines. The new format will feature several new sections and, a video will be published every two weeks, as opposed to every week.