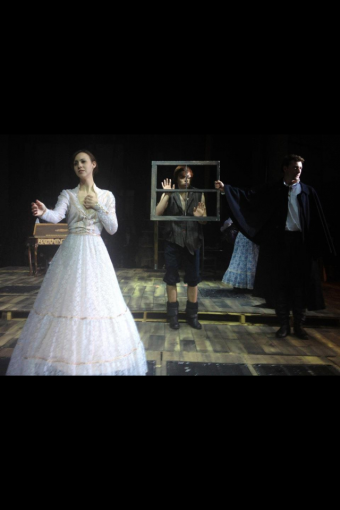 
This summer and fall Theatre Director Luis Muñoz spent several weeks and many weekends directing a group of 90-plus students from around the state in the production of Coram Boy for the All-State Thespian company. The hard work paid off with a successful performance at the state theater convention last November and an invitation to perform at the International Thespian Society’s 50th festival this summer in Lincoln, Nebraska.


“When I got the call, it was like I was going to state for the first time again,” said Muñoz, who began directing at age 17 and has served as UIL Theatre Director for the past 10 years.

Of roughly 40 productions viewed in the United States and Canada, only around eight are selected annually for this prestigious honor. In addition to the All-State company, productions from Denton Ryan and McKinney Boyd have also been invited to Lincoln.

Preparations for the production began at the 2011 state theater convention, where Muñoz held auditions for his second consecutive production as the All-State director.

“I was at the convention in Houston and auditioned about 160 actor/singers and cast 35,” he said. “The students come from over 30 different schools from all over the state.”

In addition to the cast, Muñoz recruited a geographically diverse staff. Due to the sophisticated music in Coram Boy, Muñoz enlisted the help of the Houston-Memorial High School orchestra and Flower Mound High School show choir.

The varying locations and time commitments of the performers made rehearsing for the All-State production was no simple task.

“We started our rehearsals last May for a weekend, and they spent two weeks [at UT-Austin] in Jester. We rehearsed all around the state in Austin, Houston, Temple, and Denison,” Muñoz said. “The All-state show is unique because we don’t get to rehearse for weeks and weeks. You get your people together and you go at it. The nice thing about it is that you get to work with some really good kids.”

Still, the complexity of Coram Boy posed a challenge for the talented company. The play, which opened in London in 2007, is comprised of music from variations of Handel’s Messiah and makes use of elaborate “flying” sequences and other technologies.

“We used a new system for our music that is based on Wii technology,” Muñoz said. “The conductor inputs the score into the computer and can conduct the music with a remote. Because our music was classical, we couldn’t have the organs, chimes, or some other things there, so we had those on the computers and augmented it with live performance as well.”

After receiving the official invitation last month, Muñoz is ready take Coram Boy to the next level. In an attempt to combat repeated rehearsal difficulties, Muñoz plans to implement even more technology.

“We’re trying to use some modern technology instead of having to drive all over the state because the kids have a lot to do in the spring with their studies and everything,” he said. “We want to do a mass-Skype, or something like it.”

Even if the Skype situation falls through, the company will return to Denison this summer to spend four days “practicing like the pros.” Then, they will have one final performance in Texas before heading to the festival together.

For many performers, the national festival serves as a means to showcase their talents for collegiate drama departments. Many performers from the All-State troupe, however, have already obtained scholarships to schools like Pepperdine, Southern Methodist University, New York University and the University of Texas at Austin. Muñoz said he was excited for the students to be able to share their work in a setting where the competition is over.

“I want them to come out of there with memories. That’s the most important thing. Because really, what else do we have?” he said.

Both Munoz and Stevens said they are excited about the relationships Munoz has been able to develop with the students and staff in his company throughout the experience.

“It enhances his connection to teachers and students and keeps him involved in what he supervises," Stevens said. "He is in tune and in touch with the problems, and it helps the kids and directors see him as real person instead of just a rule enforcer."

Muñoz said he is not “sitting in this second floor tower away from the students, I’m working with them. At UIL, that’s what we’re about."

The festival will be held the week of June 24- June 29 at the University of Nebraska-Lincoln.