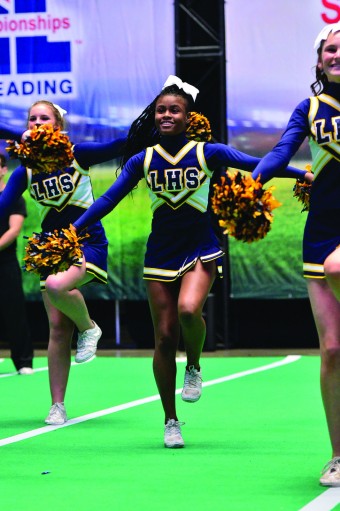 350 schools. 4,000 students. Bigger than the UIL State Track Meet, and it wasn’t just the size of the event — no meet could match the amount of school spirit at the inaugural UIL State Spirit Pilot this past spring.

“You never know in a game what’s going to come up,” Neely said. “All of a sudden the marching band fires up the fight song, and you better be ready to go. This style of competition makes squads responsible to what they’re actually cheering for.”

“Friday night is more than just the 22 players on the field,” he said. “It’s the band, it’s the drill team, it’s the twirlers and it’s the cheerleaders who work all week to provide crowd-leading cheers and make signs and prepare for the pep rally.”

At the pilot event all conferences 1A through 6A were represented, with divisions for each conference. There were also small and large co-ed divisions. One of the UIL’s main goals was to create an “equitable playing field.”

Neely said the spirit event is grounded on safety and health, which is the reason for the pilot’s existence.

“Several years ago there were concerns from superintendents and principals throughout the state about recognizing risk minimization with cheerleading,” Neely said. “Cheerleading teams were doing more and more that endangered them toward the concussion issue.”

Once the concussion protocol was put in place for UIL athletics, cheerleaders were soon added to the protocol.

“Once we built the platform of safety and health and awareness, we felt like the recognition piece of competition was the next step,” Neely said.

At first Breithaupt said there was a little skepticism about including cheerleading in the UIL set of programs, but this quickly changed.

“Once we got into the program and began to realize the excitement from the sponsors and coaches and cheerleaders themselves about the opportunity to showcase their abilities and their performances, that skepticism view began to change,” Breithaupt said. “What we saw was the fact that those students felt validated for the work that they do all year long.”

The competition was approved for a pilot again this year, and more information will be gathered in hopes of creating a full UIL contest in the future.

“We heard from schools that this event was positive, as in this was the ‘most fabulous experience’ they’ve ever had,” Neely said. “I think schools saw the privilege in being able to do this for the first time and they acknowledged it. We got a lot of thank yous.”

“Dr. Breithaupt and I presented at the national conference, and our room was packed full of people because they wanted to hear what we had done,” Neely said. “It really is groundbreaking.”

“We will have a conference schedule because it’s really important for these basketball schools that may possibly have players on the cheerleading squad,” Neely said. “We are trying to help them avoid having to choose.”

Information about the 2017 competition is coming soon and will be sent to schools when available. Neely said a high volume of schools have expressed interest in participating.

“We went against the norm,” she said. “We wanted to stay true to what our superintendents and our principals wanted. We feel that we’re in the right place and moving forward at a pace we can handle.”