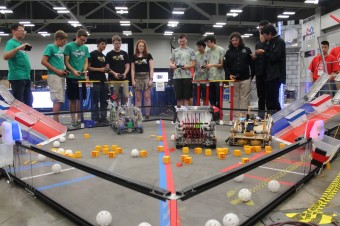 The first Robotics State Championship was held at Austin Convention Center in July.

Robots have not taken over the world yet — but they have entered UIL competition.

“I expected we would have a good event, but it really exceeded my expectations in terms of how smoothly everything ran and just being a great experience for the participants,” STEM Activities Director David Trussell said. “I had a number of students and coaches tell me that they really appreciated what UIL is doing with the robotics program to help put a spotlight on the activity and encourage more schools to participate.”

UIL teamed up with FIRST robotics to provide two competitions for the meet: the FIRST Tech Challenge (FTC) and the FIRST Robotics Competition (FRC).

“In FTC competition, teams build robots that are about the size of a laser printer,” Trussell said. “They compete on a playing field that is approximately 12 ft. by 12 ft., with customized structures for that year’s game.”

New in 2015-2016, FTC robots utilized a cell phone-based platform. Teams were able to use custom apps and Java programming in designing the functionality of their robots.

“Seeing an object, that reminds me of a remote control car, that can jump, spin, throw a ball, pick up objects, and climb a structure was exciting,” Academic Director Dr. David Stevens said. “And all of this is programmed and controlled basically by cell phone technology.”

FRC is larger in scale, with robots weighing 100 or more pounds and sometimes standing up to four feet tall. The playing field is a little bigger than half a basketball court.

“FRC is very advanced in what is required to build a robot and compete successfully,” Trussell said. “FTC teams are smaller, and the bar for entry is lower in terms of the equipment and technical expertise needed to get started and participate.”

“The teams compete with one another in one match, and against each other in the next,” Academic Director Dr. David Stevens said. “For the finals, they form alliances with other teams to create an alliance of three or four teams. So a championship is won by an alliance, which can be made up of three or four different schools.”

Although the state meet was held during the summer this year, UIL is working on scheduling the FIRST Division championship for next year in the spring.

“Having it scheduled in the summer created concerns for some schools and students in terms of being able to attend, but that shouldn’t be an issue in 2017,” Trussell said. “The program has generated tremendous interest among our schools, and we expect participation to continue to grow.”

The inaugural BEST Division Championship, another component of the robotics pilot, will take place in December of this year.

“We’ll be able to put some of what we learned from this event to use as we prepare for the BEST Division Championship,” Trussell said. “There are adjustments we can make here and there in some of the pre-meet and scheduling processes. For any event there are always improvements you can make, but overall robotics has an incredibly bright future in UIL academics.”

Robotics differs from other UIL events in that qualifier meets are run by the FIRST and BEST organizations. Scores from those qualifying meets are then used to determine advancement to the UIL championships.

Each year, there is a kickoff date when that year’s game is revealed and teams can begin work building their robots. Teams also must prepare supporting materials such as engineering design notebooks and presentations to submit to the judges at competition.

“The most successful teams bring together students with diverse talents and give them each a chance to find their role and contribute to the team,” Trussell said. “Robotics requires quite a bit of preparation, and it’s also very collaborative.”

Not only does the competition teach teamwork, it teaches numerous STEM skills.

“Robotics teaches skills including engineering, programming, math and physics,” Trussell said. “It also teaches problem-solving, creative and critical thinking, as well as fostering good communication and interpersonal skills. The knowledge and skills robotics teaches greatly benefit students in college and the workforce, whether in the STEM fields or any path they choose.”