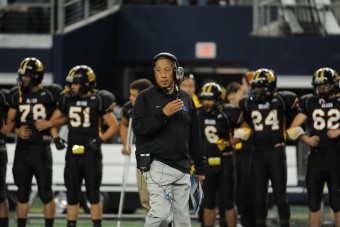 Peter Contreras retired at the end of September after working at the League for more than two and a half decades.

“Over a short amount of time, things started falling into place for me,” Contreras said. “[Bailey] wanted to know if I would be interested in switching jobs and working here at the UIL. And it was a no brainer. It really was.”

Contreras began his work at the League as a public information officer. Before becoming an assistant athletic director, he worked as a foreign exchange waiver officer.

Contreras said the most challenging part of his job as an assistant athletic director was being accessible to constituents.

“The phone calls and emails are challenging,” he said. “Because of technology, we’re accessible now 24/7, and I mean 24/7. We have a philosophy in the athletic department that we are going to get back to you whether it’s a phone call or email within two days.”

Contreras said while that could be challenging, he always tried to meet the goal.

Dr. Charles Breithaupt said “Peter Contreras was always willing to go the extra mile to make our events go well. He was admired and respected throughout the nation and especially so in Texas. He didn't simply serve as a program administrator. He worked collaboratively with coaches, officials, parents, students to make our events more user friendly.”

Contreras’s fondest memories at UIL aren’t the state championships or even one specific moment, but the daily impacts made on student’s lives.

“Looking in a kid’s face, shaking his or her hand, talking to her/him, and realizing that that athletic event we were responsible for gave them the opportunity to believe in themselves, learn about themselves and be successful — those memories far outnumber a team or a kid winning a state championship,” he said. “I saw that all the time on kids’ faces.’

After his long career at the League, Contreras had some advice to Texas coaches.

“Always remember, it’s not about you,” he said. “It’s about the student-athlete and the opportunity [coaches] have everyday to impact a life,” he said. “That’s one of the reasons I jumped at the opportunity to work at UIL. I had an opportunity to have an impact on a daily level. I could come to work and at the end of the day have a pretty good idea that I helped somebody who was helping kids. So I would remind coaches to never lose sight of the fact that they have an opportunity to make a difference in a student’s life.”

Contreras said ultimately he wanted to work at a place he knew he would miss, and a place that would miss him—he found that at UIL.

“Contreras will be missed greatly by all who came to know him these past 26 years,” Breithaupt said. “The UIL family will always have fond memories of Peter Contreras. He will be missed tremendously.”